Turning the Tables on Trident

We have posted about this before; but just in case you missed it or needed a reminder…

It is less than two weeks until Palm Sunday, March 29th when some of us will be gathering at Aldermaston Atomic Weapons Establishment to mark the occasion by praying for peace. All welcome so do come along and add your prayers to this act of witness.

If you would like to know more, or to let us know you’re coming, do get in touch! 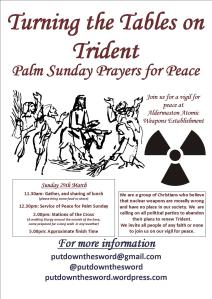 Early on Tuesday morning, thirteen people were sat in a van, heading towards AWE Burghfield, Berkshire.  Between us we had lots of tubes of superglue, some plastic tubing, bucketfuls of determination and the words of Noam Chomsky ringing in our ears;

“Fifteen years ago the World Court determined that it is a legal responsibility of the nuclear powers to meet their commitment to devote themselves to removing these awful devices from the earth.  Further development of these systems is not only a violation of law; it also increases threats to survival that are constant and serious. Those who are acting courageously to uphold our obligations deserve our sincere respect and full support.”

We stopped next to the ‘Construction Gate’.  Eight of us jumped out of the van, followed quickly by the support group, and quickly got into position lying across the gate with our hands glued fast to the people either side of us.  The traffic quickly mounted up, and it soon became clear that we’d achieved what we’d set out to do – we had impeded the ongoing redevelopment of the site, which will allow the United Kingdom to continue to build weapons of mass destruction for decades to come.  We planned to stay there as long as we could and were expecting to be arrested.  After five hours in the road and severe disruption to the day’s work we gently pulled our hands apart, prayed together, and left.

The action was organised non-hierarchically by a small group of Christians and Quakers from various denominations and peace groups from across the UK.  It felt empowering to be locked alongside other people who had decided to take this daring step into non-violent direct action, and for some of our group this was their first experience of protest in this form.  We smiled and laughed a lot, sang songs, prayed, shared communion and told stories.  In an individualised, atomised world where we spend an immense amounts of time doing what we’re told, staring at screens, and wishing ‘someone would do something about that’, it felt empowering to be part of a small group of people who had acted on their convictions and had had a positive impact.

Throughout the preparation for the action, and on the road itself, a whole host of different images and words raced through my mind, but after recently reading John Dear’s book ‘Lazarus, Come Forth!’, the one that I kept coming back to were Jesus’ last words to Peter as he was being arrest – “Put down the sword.”  John Dear describes this as the first moment when the disciples really understood what it was Jesus was about, and it terrified them.  Jesus challenges us to imagine a way of being where we do not rely on the tools of violence or oppression in order to achieve our aims, and this goes for everything, from nuclear weapons to our personal relationships.  Put down the sword.

At various points in the preparation and organisation I found myself trying to step back, to find an excuse to not go to the base or to get in the road (I’ve got things I need to do, maybe I should take pictures instead, maybe we won’t find a van we can use, maybe, maybe, maybe…) but Jesus’ words to Peter acted as a little reminder as to why we were doing what we were doing.  It was right to acknowledge the fear I had – I recently spoke with a far more experienced activist than myself, who very humble acknowledged that before every action he feels ready to ‘back out’, and hearing this made me feel more comfortable with acknowledging my own nerves.  Taking part on this action taught me a lot about not letting fear move me in a direction other than the one I want to go in.  I found real strength in the group – being one member of a group of beautiful, radical and committed people, doing something together that terrified me to think of doing on my own allowed me to overcome the fear in my belly!

The action felt like a success, but also revealed how much work we still need to do if we are to fully reveal the UK’s nuclear hypocrisy and make sure that our MP’s vote against the replacement of Trident in 2016.  Every morning vehicles, workers, materials, and nuclear convoy trucks pass through the gates of AWE Burghfield, Aldermaston and Faslane, unhindered and unquestioned, allowing our state to continue to build weapons and pose an existential threat to humanity.  We need to pile on the pressure and continue to expose the violence and hypocrisy that is our nuclear weapons system, and to confine all weapons of mass destruction to the history books.